Back in the day when Stephen and I lived in the heart of downtown Anchorage, our favorite late-night restaurant was the Lucky Monkey on the corner of 5th Avenue and C Street. Their menu was limited. They served pelmeni, or Russian dumplings. For about $6 you’d get a bowlful topped with curry powder, sriracha sauce, cilantro and sour cream. They were THE BEST. And then they closed down. It was a sad day for downtown Anchorage.

Fast forward five years. A friend and I are cruising the downtown scene at 2 a.m. and I smell them — the scent of butter and curry and meat. I follow the sound of Euro techno and there it was: Nane’s Pelmeni. I dashed in and five minutes later I was mowing down on pure happiness. They taste just as I remembered. At $8 a bowl, it’s enough to shake that drunken edge and fill you up after a night of rocking the dance floor.

Nane’s serves meat pelmeni and potato filled ones. This morning I was craving them yet again, so I used my near mother-in-law’s dough recipe and made my own potato perogies.  They were splendid. 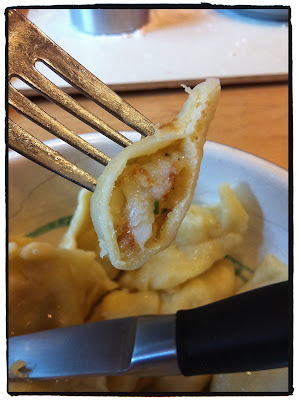 And here’s how I made them.

Directions:
In a bowl whisk together the water and egg. Start adding flour till a kneadable dough forms — I think I used about a cup. Remove dough from bowl and knead for a few minutes until it’s soft but not sticky. Add more flour if needed. Form into a ball and place back in the bowl. Cover and let rest for about 15 minutes.

Meanwhile, mix together the filling ingredients. You can get creative with this. You could use cheddar and bacon bits. I used two frozen hash brown patties because I didn’t have any potatoes. I fried them up and then broke them apart with forks in a bowl. The filling should hold together when you form it into a small ball.

Fill a large pot with salted water and get it boiling while you’re making the perogies. Turn it to low if it boils before you’re done.

When the dough is done resting, roll it on a floured surface with a floured rolling pin till it’s the thickness of a noodle (so, pretty thin). With a large biscuit cutter or the edge of a glass, start cutting out circles from the dough. Fill each circle with about a teaspoon of filling. Fold the dough over so it looks like a half moon and pinch the edges all around. The dough should be sticky enough to stay together when you press the edges hard. When you run out of circle space, ball up the dough again and roll it out. Make more perogies. Save them on a tray while you’re making them.

Place all the dumplings in the boiling water and stir gently. Turn heat to medium so it doesn’t boil so hard that it tears apart the dumplings. Boil for about 4 minutes. They should all be floating before you take them out of the water. 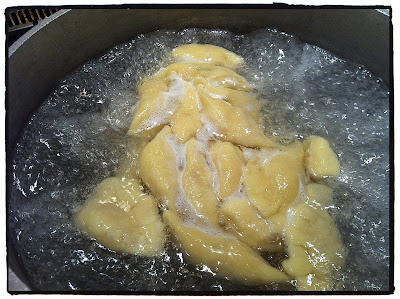 Use a large slotted spoon to remove the dumplings and place them in a bowls. Top with butter and a little salt. 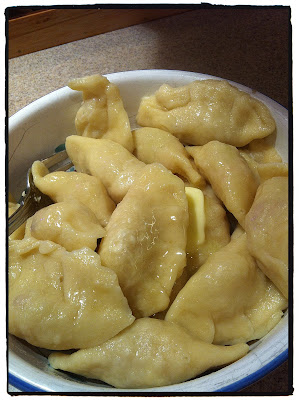